In a previous post Back To Basics I mentioned that I had decided to purchase a Nikon FM3A as long as I could find a bargain on eBay. Well, after many weeks of looking I came to the conclusion that I simply wasn’t going to be able to afford an FM3A in decent condition, I hadn’t appreciated just how much demand there was for these great cameras. So unfortunately I had to drop that idea and find another film camera to buy.

Looking at the features of the FM3A the main things I required were for the camera to have a really high build quality, to be a simple manual camera with no bells and whistles, and to have a “match needle” light meter rather than LEDs. The Nikon FE may not be as new as the FM3A or have quite the same build quality but I realised that it certainly meets all my requirements and is substantially cheaper.

I wasn’t really bothered whether I bought a chrome model or a black one so it was back on eBay to try and find that bargain and after only a couple of weeks what a bargain I found!

The eBay listing was for a bundle of items:

When I first saw the eBay listing this lot was going for around £120 with only 8 hours left so I worked out how much I thought I could sell some of the other stuff for and decided on a maximum bid of £150. Now what made me confident that I would win this is that for some inexplicable reason the seller was ending the auction at 5am – I knew that I wasn’t going to be awake at that time but I also knew that very few other people would be either so before I went to bed I entered my maximum bid and hoped for the best. Come 7am I awoke and check my emails – as expected I had won the bundle for only £146!
I decided to keep the camera bag, the strap and the 100mm lens but sell the rest. I was really torn whether to sell the 50mm lens as the build quality of it was astonishing (this was not the cheaper Series E lens but even the Series E is great quality) but I already had a 50mm AF lens and so decided to keep this instead. So after successfully selling each item on eBay I recouped £144, in other words I had just bought a Nikon FE, 100mm f2.8 lens, strap and bag for the grand total of £2. 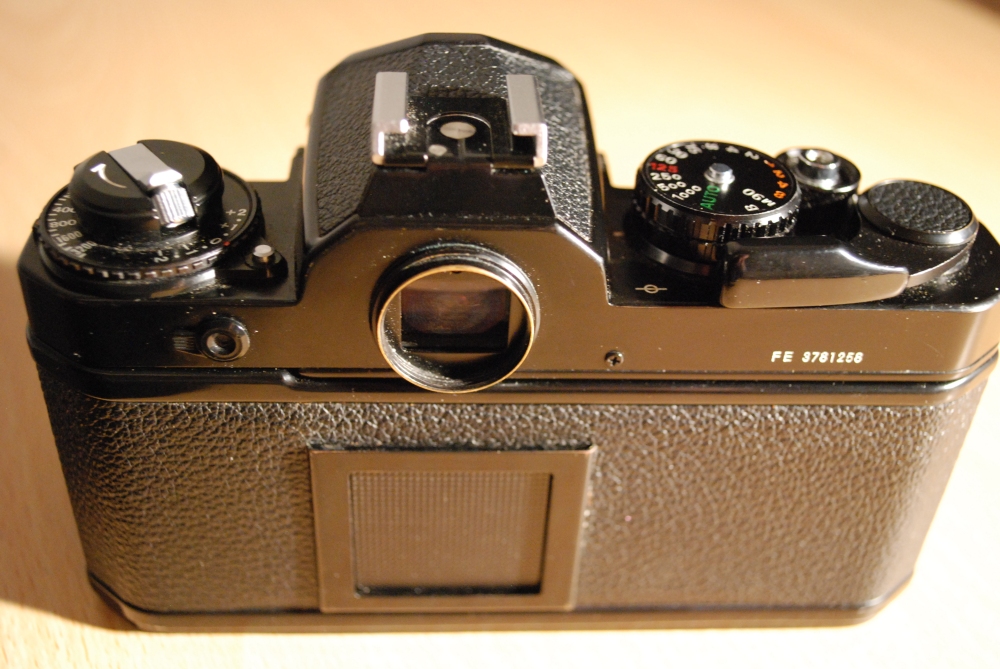 So what do I think of the Nikon FE? My first impression when I unwrapped it was how solid and well built it is, you really cannot fault the build quality. The saying “they don’t build them like they used to” is true. My second impression was how uncomfortable it is to hold compared to modern SLRs. You get used to this though, if you want an old Nikon that is comfortable to hold then you need to get the professional F3 or F4. Also surprising is how noisy the shutter is, maybe that is just because I was used to film cameras with a motor to wind the film on so the noise of the shutter on its own seems amplified.

The camera itself was as described – in very good condition. There is some brassing and a few scratches on the base plate but these are to be expect of camera that is 30 years old. The foam light seals had perished and needed replacing but this was easily done after purchasing a cheap kit on eBay. Interestingly I found out that a new FE in 1979 cost around £155 which in today’s money is around £660, quite a lot of money for such as basic camera which tells you a lot about it’s quality.

I have run two Ilford HP5+ black and white films through it so far, I love using the camera and it is small enough to carry around with my DSLR. I would recommend the Nikon FE to anyone who is interested in going back to film photography, you won’t regret it!

One thought on “Nikon FE”