It seemed like a good idea at the time – a night time expedition to discover what remains of a supposedly haunted house, take a few photos, and write a blog for Halloween. It doesn’t seem like such a good idea now.

Milner Field was the home of Titus Salt Jnr – the son of the founder of Saltaire in West Yorkshire. No expense was spared in the building of this lavish mansion which was completed in 1869. Situated in an idyllic setting overlooking the Aire Valley and away from the noise, smoke, and hustle and bustle of the mills, the mansion was built on the site of a previous house of the same name. Unfortunately for Titus’ family and for future residents of the property the fortune spent building this house did not translate into good fortunes for themselves – far from it.

On 19th November 1887, at the relatively young age of 44, Titus was found unconscious in the billiard room and was pronounced dead before a doctor could arrive. Subsequently Sir James Roberts bought Saltaire and moved into Milner Field in 1903 by which time his eldest son had already died of pneumonia. In 1904 his youngest son drowned, in 1912 his second son died of a “nervous illness” and his last surviving son was badly injured in the First World War. Just to rub salt into the wounds the family was caught up in a scandal that hit the national headlines when their married daughter’s lover was brutally murdered.

By 1923 ownership of the estate passed into the hands of a Mr Ernest Gates – weeks after moving into Milner Field his wife died, within two years Ernest too passed away after a “domestic accident” led to septicemia. In 1925 Arthur Remington Hollins bought the property. Within a year his wife died of pneumonia and three years later Arthur also died after suffering from “irritation of the gall bladder and diaphragm” – he basically hiccuped himself to death.

Unsurprisingly Milner Field gained a grisly reputation – the house was cursed or even haunted. Despite continual efforts to sell the house Arthur Remington Hollins was to be its last resident – nobody would even consider buying it once they discovered its past. For decades the house fell into disrepair and eventual ruin. By the 1950s whatever was of value, including much of the stone, had been sold or plundered – what remained was demolished.

For the last 60 years Titus Salt Jnr’s country estate, at one time of such opulence that members of the Royal Family came to visit, has been lost in the undergrowth as nature has reclaimed the site. The South and West Lodges at either end of the grand driveway are still occupied but most people who walk along this now muddy dirt track do not realise that the ruins of this cursed house lie within the woods through which they travel.

So it was with the knowledge of this history of death and misfortune that I decided to take a walk into the dark woods to see what remained of Milner Field and to see if the stories of a curse and of hauntings were true.

The imposing gateway at the West Lodge didn’t do anything to allay any fears I had, with the street lights behind me the track beyond the Gothic gates looked dark and intimidating.

Armed with a single torch I headed down the track and deeper into the woods. On either side of the track thick undergrowth obscured any view my torch was able to give though, along with the crunch of my footsteps, I could clearly hear wings flapping, leaves rustling, and twigs snapping as I disturbed the hidden wildlife.

Along with my phone and my torch I carried two pieces of paper – a floor plan of the mansion and a map of the whole estate. I took a right turn off the track at a clearing at what I guessed used to be the entrance to the courtyard and after a few minutes of stumbling around I found the remains of one of the courtyard gateposts.

At least I now knew I was in the right location and further evidence was strewn around the immediate area.

Being off the beaten track meant pushing through thick undergrowth and the darkness closed in on all sides. If my torch failed me now I knew I would struggle to find the path again – the fable of Hansel and Gretel crept into my mind and more worryingly the story of the Blair Witch Project. 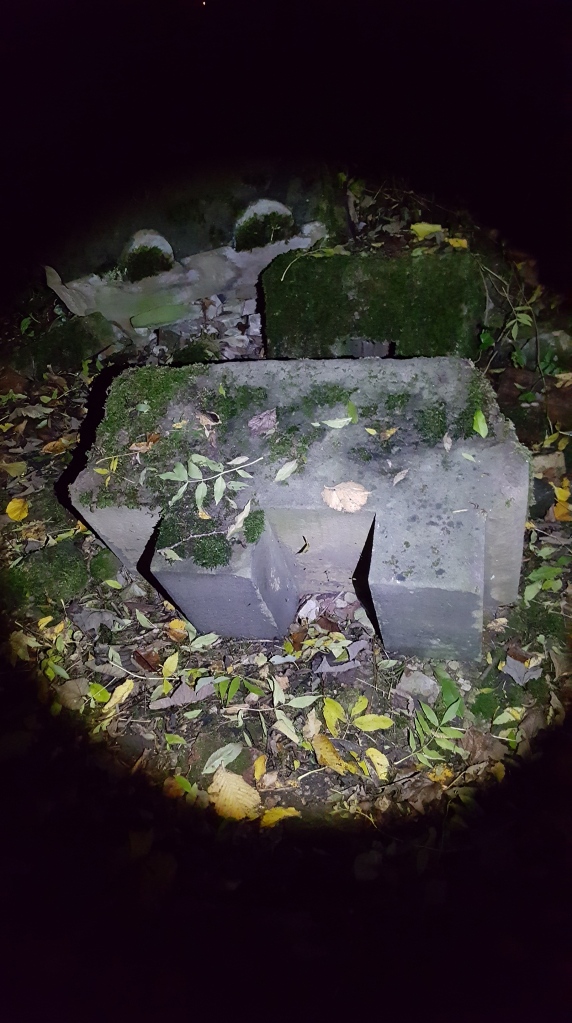 As I went further away from the gateposts I tripped over a stone border which proved to be the edge of the once grand conservatory. Remarkably, after all these years, the mosaic tiles were still in place .

I could now get my bearings from the floor plan I had brought with me. Moving across the conservatory floor and into the Orangery I knew which room was to my left – the billiard room on the floor of which Titus Salt Jnr breathed his last breath.

Standing in the exact spot where Titus Salt Jnr died sent a chill though my bones and the reality of where I was suddenly hit me – on my own, in dark dense woodland, in the ruins of a house where all the residents had met an early or unpleasant end.

I tried to calm my nerves but I had that awful sense of being watched. I could see nothing but there were noises in the woods all around me. I needed to get out of there, but how to get back to the footpath? I quickly moved in what I believed was the right direction until my torch flashed across something which sent my heart racing.

I had heard the stories about the cellars of Milner Field – when demolishing the house they used dynamite however the quality and strength of the building had left the cellars largely intact. The plans of the house showed the cellars running the full length of the building and from what I could see these extensive subterranean rooms were still there. I stumbled away as quickly as I could not knowing whether I was being watched from the woods or whether I was being tracked from beneath my feet.

Whatever evil being was present at Milner Field (and probably had been since before Titus Salt Jnr built his home there) was lurking in these cellars I was sure. I fled in a panic but as I ran I felt a cold hand grab my ankle, I tumbled to the ground and my flickering torch picked out yet another entrance to the cellars.